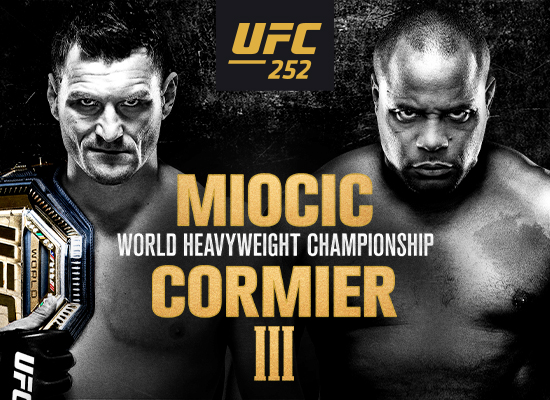 UFC 252 sees the much awaited rubber match between heavyweight champion Stipe Miocic and former double-champ Daniel “DC” Cormier for the heavyweight championship of the world. The first fight between the two heavyweights in July 2018 saw Cormier knock Miocic out in the first round when he landed a beautiful right hand in the clinch. The second fight in August 2019 saw Miocic fight back from serious adversity in the first 3 rounds, make incredible adjustments and eventually knock Cormier out in round 4. This, in my opinion, is set up to be the greatest trilogy of all time, with each fighter having a finish over the other in their past meetings. UFC President, Dana White believes the same and said at the press conference “you don’t see heavyweights go at it the way that these two have in the first 2 fights.” White also believes that this fight will determine the best heavyweight of all time and rightfully so. Both these fighters have truly exceptional skills, unmatched resumes, and deserve the high praise they receive.

This fight will take place at the UFC Apex in Las Vegas, where the cage is smaller than regular size cages. Cormier will look to use this to his advantage to close the distance and use his olympic level wrestling to take the fight to the ground. Miocic’s wrestling and takedown defense are very high level as well, so this will not be an easy task for Cormier. Miocic will look to keep the fight on the feet and maybe mix in some takedowns, to keep Cormier guessing. Miocic should and will look to land body shots, which worked extremely well for him in the second fight. This fight is going to be absolutely phenomenal and we’re finally here.

Cormier to win (-120)
The former double-champ looked great in the last fight despite the loss, until he started fighting overconfident, with his hands down and got finished. He will not make the same mistakes again, use his world class wrestling in the smaller cage and get the job done.

O’Malley by KO/TKO (+140)
The undefeated Sean O’Malley will continue his winning streak tonight and will be the first person to finish the dangerous Marlon Vera. O’Malley will look to do what he does so well, maintain distance and land strikes on the feet. Vera will try to close the distance and make it dirty.

Dos Santos by KO/TKO (+275)
Former heavyweight champion Junior Dos Santos will use his superior boxing skills to land power punches on Jairzinho Rozenstruik and get the finish. Rozenstruik is coming off a devastating KO loss in May and his chin is unlikely to hold up if Dos Santos lands.

Pineda to win (+200)
Although this is Daniel Pineda’s UFC debut, he is an experienced fighter. Herbert Burns struggled at the weigh-ins and missed weight by 3.5 pounds. Pineda looked great and will get the job done tonight.

Dvalishvili to win (-225)
Coming off of four wins, Merab Dvalishvili will look to mix up his striking and takedowns to make sure he extends his winning streak to five. The veteran John Dodson, who is a great fighter, will not be able to keep up with Dvalishvili.

Watch the early prelims at 7:00 pm EST and the prelims at 8:00 pm EST on ESPN and ESPN+. Catch the main card at 10:00 pm EST only on PPV. Huge night for the UFC and fans around the world.