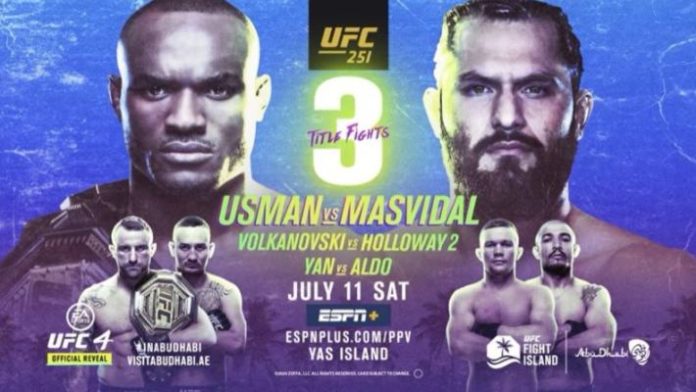 The co-main event at UFC 251 featured the rematch between Alexander “The Great” Volkanovski and Max “Blessed” Holloway. The second bout between the two featherweights was much more competitive than their first meeting in December 2019 at UFC 245. Most people around the world were shocked to hear Bruce Buffer announce Volkanovski as the winner and “still” featherweight champion of the world via split decision. MMA experts and even UFC President Dana white believed that Holloway had done enough to win the fight and regain the featherweight belt he had lost to Volkanovski. Holloway looked sharp from the beginning and it was clear that he was not going to let Volkanovski score easy points like he had in their previous meeting. Holloway scored knockdowns at the end of rounds 1 and 2, and won those rounds. Volkanovski who promised to finish Holloway was starting to realize how tough it was going to be to keep that promise. Despite having been knocked down twice, Volkanovski worked extremely hard to keep the fight close and edged out rounds 4 and 5. Round 3 however was the round where it was close but people around the world believe that Holloway won that round and would hence win the rounds 3-2. Unfortunately for Holloway only 1 of the 3 judges saw the fight play out his way. So what can we take away from this fight?

People can rightfully say that the decision was wrong but they can also agree that the top 2 fighters in the featherweight division are unbelievable competitors and that ten rounds have not been enough to separate them.

Alexander Volkanovski is willing to push his limits and fight till the very end to get the win. The Australian has no quit in him and that is what helped him become the champion and make his first title defense. Tough to imagine anyone in the division not named Max taking his belt.

Max Holloway, who should have the featherweight belt back, is not only a phenomenal fighter like we know he is, but also a class act outside the octagon. He not only handled the tough loss like a professional, but also auctioned off his fight worn gear to support unemployment in Hawaii just hours after his heartbreaking defeat.