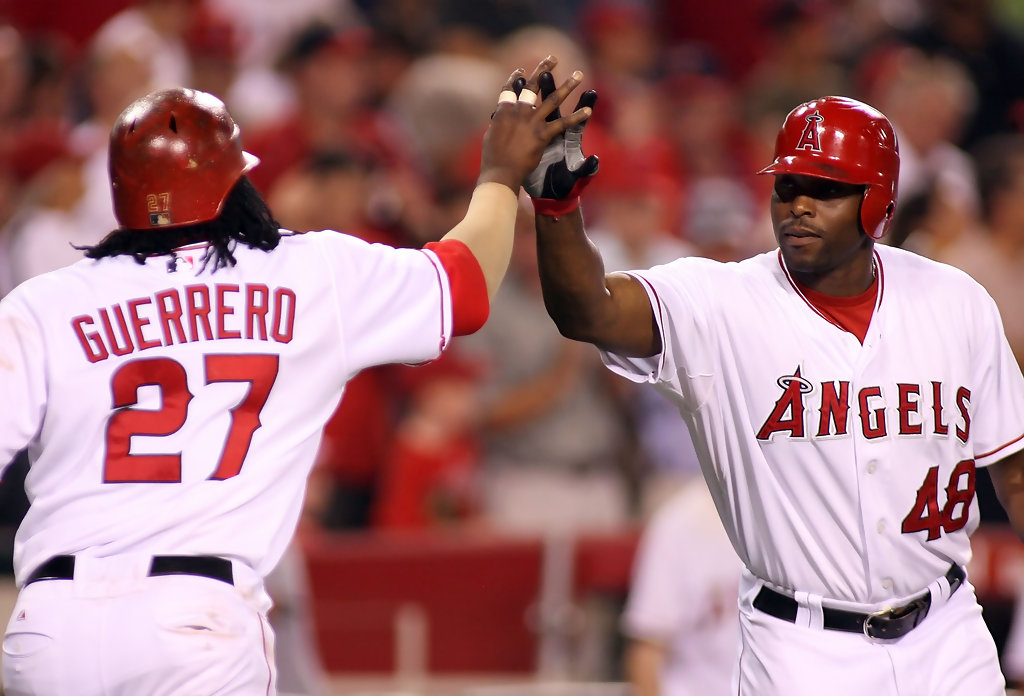 In 2002, the Angels were on top of the MLB mountain. They had just defeated Barry Bonds and the Giants in the World Series, their roster was full of young talent, and there was no sign of slowing down. As we know, this positive feeling was short-lived, because since that season, the Angels haven’t been back to the World Series. From an outside perspective, the past 18 years for the Angels may not look so bleak. They’ve had numerous playoff appearances and currently have the best player in the game, but every fan should know that the greatest success comes from championships. During this time, Angel ownership has spared no expenses. They have sought after and acquired the biggest names in free agency numerous times. Year in and year out, LA has “won” the offseason, bringing a roster full of stars into Spring Training, but their pursuit continues to fall short. Here are some of the biggest names to play in the Angels Uniform during the last 18 years.

By the time Colon reached the then “Anaheim Angels,” he was already an established pitcher. Angels fans got to see the best of Colon, his CY Young season, and the worst of him as well. As an Angel Colon pitched to a 4.66 ERA while going 46-33 as well. During that span, the Angels got swept in two ALDS series, and also lost 4-1 in the ALCS in 2005.

The efforts of the original Vladdy can not go unnoticed. This was a great signing for the Angels, and it instantly paid off as he won the AL MVP in 2004 and would finish his Angels career averaging .319 33 HR and 118 RBIs a season. Guerrero was completely productive during his time in Los Angeles/Anaheim, but it translated to little playoff success. In addition to the previously mentioned playoff misfortunes, Guerrero was part of teams that lost in the Division Series in 2008 and the Championship Series in 2009.

Despite signing Hunter past the prime of his career, Torii still put up very productive years for the Angels on both sides of the ball. As a member of the Halos, Hunter made two All-Star games, won two Gold Gloves, and also won a Silver Slugger. Hunter was a key member of the 2008 and 2009 playoff teams for the Angels but never contributed enough to get them to the playoffs after that.

When the Angels traded for Mark Teixeira in July of 2008, many people thought it would completely change the direction of the team. They were already playoff-bound, but Tex would hopefully push them over the top. In his short Los Angeles stint, Teixeira would hit .358 with a 1.081 OPS. Although Teixeira raked, it wasn’t enough to get them through the Division Series in 2008, and Tex would leave in free agency shortly after.

Dan Haren was a very average acquisition for the Halos, and it led to zero playoff appearances, but the trade for Haren with the Diamondbacks came at a great expense. The Angels sent a package including Tyler Skaggs and Patrick Corbin to Arizona to complete the trade. Although Skaggs would eventually return to Los Angeles, Patrick Corbin has been one of the best lefties in the game the last few seasons, and the Angels have desperately needed starting pitchers as of late. This Dan Haren trade hurt them more in the long run than they would have realized.

The trade for Vernon Wells was a sad attempt to revive a player well past his prime. Wells hit .222 as an Angel and contributed little to nothing to the team’s overall success. They were also forced to give up Mike Napoli and Juan Rivera, who both still had a handful of productive years left in the tank. The Angels would play zero playoff games with Wells on their team.

The Angels signed Albert Pujols for 10 years and $240,000,000. To this day, Pujols still gives every game his best effort and has had a few decently productive seasons for the Halos. With that being said, every Angels fan hoped for more out of the signing. Since the acquisition, the Angels have played in one playoff series and got swept in it. When they signed Pujols, he was coming off of a World Series win and was still widely regarded as one of the best players in the game. Injuries have slowed the machine down greatly, and the Angels are stuck with him through the 2022 season.

CJ Wilson was highly coveted when he signed with the Angels. He had pitched many meaningful playoff games as a member of the Rangers at a young age, was left-handed, and seemed like he was on pace to have a great second half of his career, and the Angels tried to capitalize on that. Ultimately, Wilson would be a productive member of their starting rotation, but by the end of 2015, injuries had slowed him down. Wilson was a member of the team that got swept by the Royals in the 2014 ALDS.

The Angels traded for Greinke in the middle of the 2012 season, giving away Jean Segura to the Brewers in return. At the time, this was a decent move, but it didn’t pay off at all. After a decent second half, Greinke jumped ship to the other side of town and signed with the Dodgers. The Angels would finish the 2012 season in 3rd place in the AL West (out of 4 teams).

Hamilton’s career had been up and down at this point, but he was ready for a new chapter in Los Angeles. Before signing with the Angels, Hamilton was on a streak of five straight All-Star games and even won the AL MVP along the way. Needless to say, Hamilton was a star, but he struggled heavily to stay on the field as an Angel, and his production dipped mightily. Before the 2015 season, while recovering from shoulder surgery, Hamilton relapsed with his drug addiction and was released from the Angels.

Upton acquired from the Tigers via trade at the deadline in 2017. Since joining the Angels, Upton has been “as advertised,” but hasn’t helped the Angels get over the hump into the postseason. Despite missing many games due to various injuries, Upton is only 31, and could still help the Angels in the future, but so far, this trade hasn’t panned out.

The Angels have done their best to have the most talented team on the field. They have “won” many offseasons, but none of it has translated to anything other than a few short playoff appearances. They were a staple at the top of the AL West for a few years since their 2002 championship. Since having Mike Trout, the best player in the sport, they have been to one playoff series, getting swept in 2014 by the Royals. During the Trout era, they have made many questionable moves including: trading Mike Clevinger, Mark Trumbo, and Howie Kendrick, and signing Mat Latos, Tim Lincecum, Andrew Bailey, Ian Kinsler, Zack Cozart and Michael Bourn. Although there is a lot to complain about with the Angels, they just signed Anthony Rendon and Shohei Ohtani looks like he could have a bright future ahead of him. They also have Mike Trout locked up for likely the rest of his career, so they better make it count.