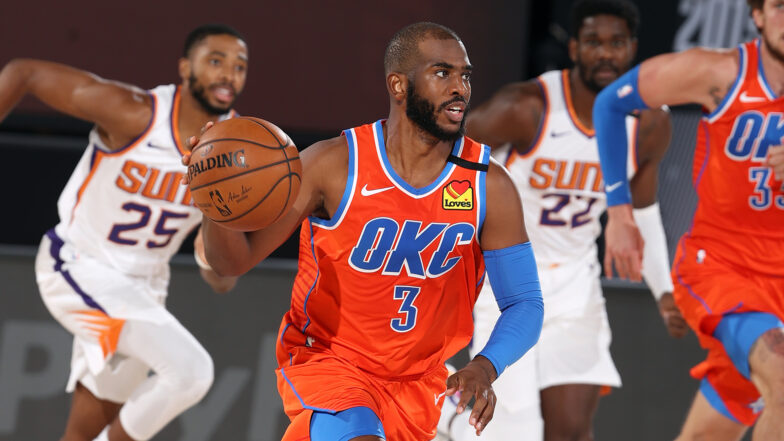 The NBA Draft is just days away and the season is around a month away, so teams’ are making moves to prepare themselves for the upcoming events. In recent news, the Phoenix Suns made a “win-now” move in acquiring All-Star point guard Chris Paul from the OKC Thunder. The Thunder in return received Kelly Oubre, Ricky Rubio, Ty Jermone, Jalen Lecque, and a 2022 first-round pick.

Breaking Down the Deal: Which Team Wins?

This trade is a complete win-win for everyone involved. The Suns were able to add a top-level veteran and leader in Chris Paul, who surprisingly brought the Thunder to the playoffs. Phoenix is hoping he’ll have the same impact in the desert. The Suns finished last season with a record of 34-39, after sneaking into the NBA Bubble and winning all eight of their seeding games. Unfortunately, they were unable to grab a playoff spot, but maybe, just maybe, Chris Paul will be the missing piece.

For the Thunder, as previously mentioned, they over-achieved last season, partly because of Chris Paul, but with Paul’s age, it was definitely time to move on from him. The Thunder are well-positioned at Point Guard, as it seems they’ll hand the keys to the offense to Shai Gilgeous-Alexander, who is entering his third season in the league. OKC will also benefit from having Ricky Rubio either on the bench or in the starting lineup, alongside SGA. In addition to their on-the-court talent, the Thunder are absolutely stacked on draft picks. Between 2021 and 2022, they will have up to 8 picks in the draft, leaving them in a prime position to either trade for a star or continue to build with youngsters.

Will Chris Paul Live Up to the Hype?

This will be a huge test for CP3. Paul has been looked at as a championship-level point guard ever since he joined Blake Griffin on the “Lob City” Clippers. Even after failed playoff runs with LA, the Houston Rockets, and OKC last year, Paul is still a likely missing piece for any playoff team looking to reach the pinnacle of the sport. Paul will undoubtedly be looked at as the leader in the locker room next year. Although the Suns have a solid young core including Devin Booker and DeAndre Ayton, neither of them knows what it takes to win in the playoffs, YET. Paul has the chance to cement his legacy as a leader and a champion in Phoenix, but they are definitely still underdogs.