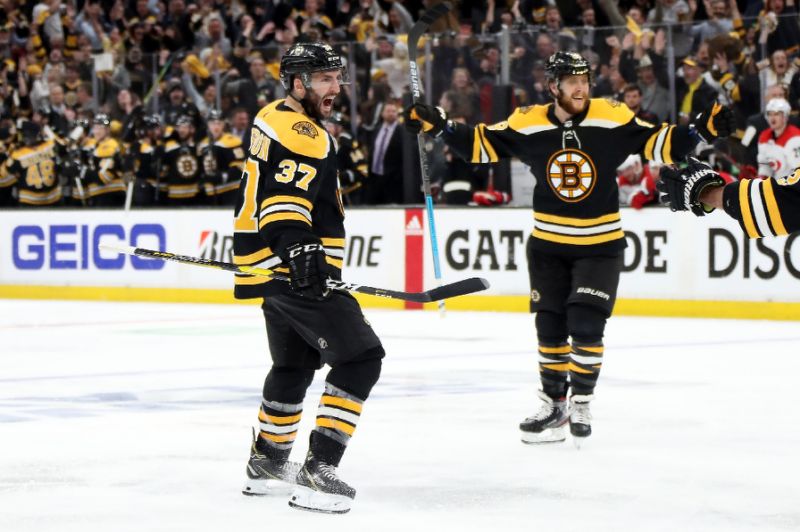 Over the past 17 years, the city of Boston has taken the sports world by storm.  The Patriots have won 6 rings since then, the Red Sox have won 4, and the Celtics and the Bruins have each won one championship. That is 12 major championship titles in the last 17 years. Basically, this city always has something to cheer and boast about. This year, they have the chance to take the sports world by the throat.

In October 2018, the Red Sox defeated the Dodgers in 5 games to win their fourth ring in 15 years. Four months later, the Patriots defeated the LA Rams in what was arguably the most boring Super Bowl of all time. This game required no 28-3 comeback, but instead was a smooth victory of 13-3. Fast forward to today, and the Boston Bruins are up 2-0 in the Eastern Conference Finals to the Carolina Hurricanes. These two wins have been completely one-sided, and it is obvious that the Bruins want to have a championship parade of their own.

After being down 2-1 in Game 1 of the ECF, they scored 4 unanswered goals and won by a score of 5-2. Yet, if you think that win is huge, they made an even bigger statement in Game 2, putting on a clinic against the Canes and taking the game by a score of 6-1. The historic run from the “Bunch of Jerks” looks to be coming to an end, falling at the hands of the Bruins dynasty. Yet, it can be argued that the Bruins are destined to not only win this series, but win the cup.

As mentioned earlier, the Sox defeated the LA Dodgers in last year’s World Series, and the Pats defeated the LA Rams four months later. The Stanley Cup Final typically ends in June, which will be four months since the Patriots had won the Super Bowl. And in addition to that, there is still a California team in the running to be the Western Conference Champs, the San Jose Sharks. That being said, 3 of the 4 major Boston teams could win a championship over a California-based team at four-month intervals. On top of that, a Sharks-Bruins series could be electric. The two teams play very similar styles of chippy hockey, and the Sharks are attempting to win their first cup in franchise history. One player on the Sharks probably wants it more than anyone; Joe Thornton. Thornton is a 21 year NHL veteran, and was drafted by the Bruins 1st overall in 1997. That being said, that potential Finals matchup could be one for the ages.

The Bruins are my Stanley Cup favorite for a few different reasons. Earlier in the playoffs, they defeated the Toronto Maple Leafs in 7 games, and later the Columbus Blue Jackets in 6. The B’s are being led by their dominant first line of Brad Marchand, David Pastrnak and Patrice Bergeron, with Tuukka Rask shutting the door on the other end with a 2.02 GAA and a .937 GAA throughout the playoffs. The Bruins have not won a cup since 2011, and they definitely have the talent to do so this year, after making moves at the deadlines to grab key guys such as Charlie Coyle and Marcus Johansson.

Carolina is hosting Game 3 tonight at 8:00 on NBCSN. The Canes are 5-0 this year at home this playoffs, but I think the Bruins are too much of a wagon to roll over after two dominant wins to lose two on the road. I’m taking the Bruins in 5 this series, and a new Stanley Cup banner in the rafters following a Stanley Cup Final victory over either the Sharks or the Blues. The Bruins are already a cup favorite, and if you take into account the other Boston championships in the past year, it may just be destiny for the B’s this year.