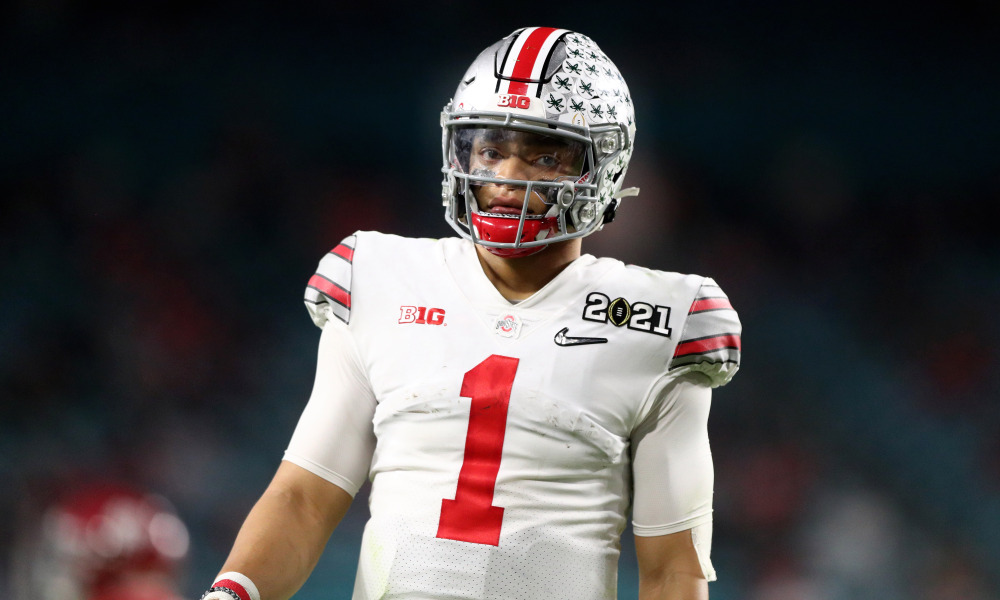 Oddly enough, the offseason is my favorite time of the year in the NFL, so I am very excited for this extremely talented draft class to enter the league. So with that being said, here is what I think will happen with the first twenty picks of the 2021 NFL Draft.

This will be the easiest pick to predict in this year’s draft, as Lawrence is a generational quarterback talent that we see about once every ten years.

The Jets pick has the potential to turn the entire draft upside down, as they could draft a quarterback, a wide receiver, Penei Sewell, or even trade the pick. At the end of the day though, my gut tells me that the Jets will want to start fresh and take a quarterback with this pick and trade Sam Darnold. If the Jets decide to use this pick on a quarterback like I think they will, the pick will likely be either Fields or Zach Wilson, and while I think both players offer high upsides, I think Fields has just a little bit better of a chance to be an elite NFL quarterback.

This pick also has the potential to change the whole first round, as the Dolphins could draft a quarterback here if they do not believe in Tua long-term, or they could even trade this pick for Deshaun Watson. I think that the Dolphins are going to give Tua a full season to show them what he can be, but they will also give him a huge help by drafting Sewell at three. Sewell is an elite lineman and that can go a long way in Tua’s development.

The Falcons might be ready to move off of Matt Ryan after this season, so they could very well try to land their future quarterback with this pick. Wilson has a lot of potential to be a good quarterback in the league, so I fully expect him to be drafted close to the top of the draft.

Cincinnati desperately needs help on the offensive line, so if Sewell doesn’t fall to the Bengals at 5, they could potentially trade back and get additional picks while still possibly taking Slater a few picks later in the first round.

The Eagles need help in a lot of places, and with one of the worst cap situations in the league, the Eagles could be a candidate to trade back as well, but I currently think that they will take Farley here as he is the best corner prospect in this year’s draft.

Kenny Golladay and Marvin Jones are both free agents this offseason, so the Lions will likely have at least one hole to fill at the wide receiver position. Chase sat out this year but he is still an elite prospect that should be a key contributor to a team in his first year.

Trey Lance is an incredibly intriguing quarterback prospect, as he is very mobile and has a big arm. If the Panthers don’t trade for Deshaun Watson, Lance seems to be a perfect fit to be taken by the Panthers and then sit behind Teddy Bridgewater his rookie year with the hopes that he will be ready to start in 2022.

With a lot of good pieces on offense, the Broncos will likely look to add to their defense in the draft. Von Miller is at the end of his career so Parsons would be a great fit for Denver.

The Cowboys desperately need help on defense, so Surtain seems to be a great fit at ten for Dallas.

The 49ers might not be able to resist taking Devonta Smith or Jaylen Waddle here if they’re available like I am projecting, but they could use some help on their offensive line too.

Pitts is the best tight end prospect, maybe of all-time, so he could easily go before thirteen, but with Hunter Henry’s upcoming free agency, the Chargers might have a hole to fill at tight end.

The Vikings had a terrible pass rush in 2020, so they would LOVE to see Rousseau fall to them with this pick.

Bill Belichick and the Patriots have struggled mightily over the years to draft talent at the skill positions on offense, so taking Smith with this pick would be a slam dunk for New England.

Arizona will almost definitely address their issues on defense in the first round of the draft, and Paye is a talented defensive lineman with plenty of upside to make him worth a first-round pick.

Gruden and Mayock’s recent draft history makes me think that they might not be able to resist drafting Jaylen Waddle with this pick, but the Raiders haven’t had a good pass rush since they traded Khalil Mack, so I think they will go for the best pass rusher on the board with this pick.

After taking Sewell at three instead of a wide receiver, Waddle would be a perfect fit for the Dolphins at eighteen to further help Tua’s development.

Washington would love to add a threat on the outside other than Terry McLaurin, so Bateman would be a great fit for them here in the back half of the first round. If Washington adds a quarterback (maybe Darnold) in the offseason and then drafted Bateman, they would be a scary team to go up against.

Allen Robinson is a free agent, so if he leaves like everyone seems to expect, then the Bears will have Anthony Miller and Darnell Mooney as their top two wide receivers, creating an obvious need for them. Toney is an athletic freak that pops off the screen when you watch him, so he could bring an explosive element to this offense.