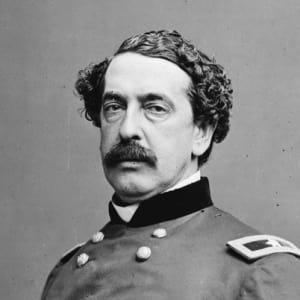 America’s pastime, baseball, is widely believed to have been created by a man named Abner Doubleday. But who is Abner Doubleday and why is he credited with inventing something he never wrote about in neither letters nor diaries?

Doubleday was born in Ballston Spa, New York on June 26th, 1819. While his roots stem from Ballston Spa, Doubleday traveled around the United States to serve his country through a highly impressive military career for most of his life. Doubleday began his pursuit of military life service by attending the prestigious West Point Military Academy. After graduating from West Point, Doubleday fought in the Mexican-American War from 1846 to 1848. Ten years later, Doubleday fought in the Seminole Wars. Then the American Civil War broke out and Doubleday served the Union Army as a general. In 1861, Doubleday was second in command at Fort Sumter, where he ordered the first Union shots in the horrific war. Doubleday’s life was devoted to serving his country, so where did the idea of him inventing baseball originate?

The myth of the invention began with Albert Goodwill Spalding. Spalding was a dominant pitcher and outfielder in Major League Baseball for a total of seven years, but his impact on the game expanded further than just playing. During his playing career, Spalding was a major promoter of spreading baseball and eventually took promoting the game to the next level when he became an executive of the game. Spalding took over as the president of both the Chicago White Stockings and the National League of Professional Ball clubs. Also, in 1876 Spalding and his brother created a sporting goods company, which is presently known as Spalding. Spalding’s goal was simple, he wanted to spread baseball for business purposes. While trying to spread the game around the United States, Spalding got into a debate with Henry Chadwick, the chief baseball journalist of the time, on how baseball was invented. On one side, Chadwick believed the origins of baseball came from England and on the other, Spalding believed American, Abner Doubleday invented the game. Years after Doubleday’s death, Spalding appointed Abraham G. Mills to head a commission to determine where the game originated; the commission would later be known as the “Mills Commission.”

The Mills Commission consisted of 6 members: Abraham G. Mills, president of the National League from 1882 to 1884; Morgan G. Bulkeley, the first National League president; Arthur P. Gorman, ex-president of the Washington Base Ball club and former player; Alfred J. Reach, former player and owner of Reach Sporting Goods; George Wright, former player and founder of the Wright and Ditson Sporting Goods Company; and lastly; James E. Sullivan, the president of the Amateur Athletic Union. The common denominator between these men was they all were associated with baseball in America and would benefit greatly if an American was the founder of the game. That is exactly why the story was made up by Spalding in the first place, Spalding wanted baseball to be a true American story: made by America and played in America.

In 1907 the decision of the Mills Commission was reached; the commission ruled that baseball was created by Abner Doubleday. The main reason for this verdict was the testimony of mining engineer, Abner Graves. Graves had heard that the Mills Commission was looking for people that had any information on how baseball was created. In response, Graves wrote two letters addressed to the Mills Commission claiming he knew the origins of baseball. The 71-year old Graves claimed he had grown up with Doubleday and remembered him drawing diamonds in the dirt resembling a baseball field around the year 1839 in Cooperstown, N.Y.

Abner Graves concluded his first letter to the Mills Commission with the following, “Baseball is undoubtedly a pure American game, and its birthplace Cooperstown, New York, and Abner Doubleday entitled to first honor of its invention.”

The Mills Commission did not question Graves, even though when Graves remembered seeing Doubleday drawing in the dirt was the year 1839, which would mean Graves was 5-years old and Doubleday was at West Point Academy. Clearly, there were reasons to doubt Graves’s story, but baseball had found the perfect American story and that was more important. It seemed Spalding, the Mills Commission, and Abner Graves were on the same page: made by America, played in America.

In Graves’s second letter he wrote, “Just in my present mood I would rather have Uncle Sam declare war on England and clean up her mess rather have one of her citizens beat us out of baseball.”

No, Abner Doubleday did not invent baseball, but he unknowingly had a major impact on the spread of baseball and those effects are still being seen today. Today, Cooperstown, the reported place Doubleday drew diamonds in the dirt, is home to the Major League Baseball Hall of Fame. Baseball fans from all over the world come to the small New York town to pay tribute to the greats in baseball history. “Doubleday” is a name of many baseball fields across the nation, the most notable are found in Cooperstown and at the West Point Military Academy, home of the Army Black Knights baseball team. It’s funny to think that a false story can be considered true history for so many years and have such a positive impact on Americas’ game.