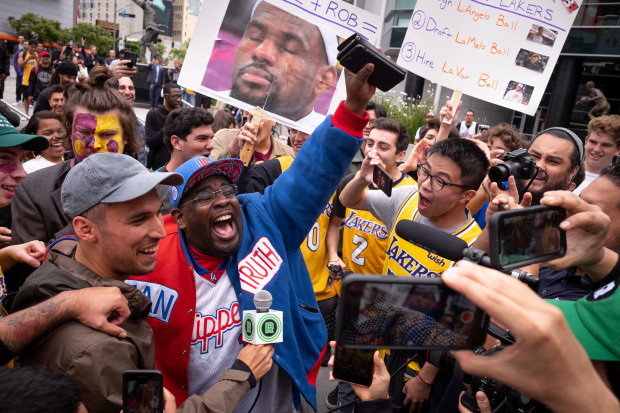 “The Laker era is over.” At least according to Los Angeles Clippers superfan Clipper Darrell. Los Angeles Mayor Eric Garcetti also took to the media today, declaring the city a “Clippers town.” While these statements may be slightly biased and not entirely true, there definitely is trouble in paradise for Los Angeles Lakers fans. Despite the huge offseason signing of Lebron James, the Lakers injury-plagued season ended with a disappointing record of 37-45; and a sixth straight year not making the playoffs. Not to mention, head coach Luke Walton was fired and Magic Johnson abruptly left his position as President of Basketball operations shortly after the end of the regular season. Lakers fans decided to turn their anger and disappointments into action, holding a protest earlier today outside the Staples Center.

Many of the frustrations and anger of protesting members of Laker nation were not pointed at the players, but instead towards the front office, owner, and management of the team. One of their main targets is Jeanie Buss, the owner of the Lakers. Many fans feel as if she makes too many decisions for the organization based on nepotism and friendship instead of expertise, talent, and experience. Fans also feel Jeanie Buss is too easily swayed by Kurt Rambis, an advisor for the team and another person not well liked by Laker Fans. Fans even voiced anger towards Lebron and not hiring Tyron Lue as the Lakers look for a new head-coach. One fan even went so far as to suggest that the Lakers trade Lebron James, or “LaBaby” to solve their problems. These protests don’t represent the feelings of the entire fan base yet still hold some value. While trading Lebron doesn’t necessarily solve their problems, the Lakers organization has a big upcoming offseason to turn this around.

While it is not the first time in the last five years we have said, “this offseason is a big one for the Lakers”, this time it is true. An organization with a rich history of Larry O’ Brien trophies, NBA stars, and a winning culture, their recent playoff drought turns fans views toward both the past and the future, remembering the glory days while sustaining a level of hope that the Lakers will return to this status. Potential free agent additions of Kevin Durant, Kawhi Leonard, Kyrie Irving and even Kemba Walker are a part of this brighter future the Lakers see. Adding any one of these stars will bring a huge boost to the roster.

However, the Lakers still have two other problems. They need a head coach and they need to find a way to stay healthy. Current key pieces for the Lakers Lonzo Ball, Kyle Kuzma, Brandon Ingram, and of course Lebron James all missed considerable amounts of time due to injury. If the Lakers can bring in a fresh, motivated head coach, add a couple stars in free agency, and find a way to stay healthy, I have a feeling this will be the last Lakers protest for a long time.

Sport and Entertainment Management major attending the University of South Carolina despite being a huge and long-suffering Tennessee Volunteers fan (This year is our year...). Big Celtics guy. REAL Football guy’s guy. SEC has the best football. I have won two state championships, love playing basketball and football, and also enjoy fishing.